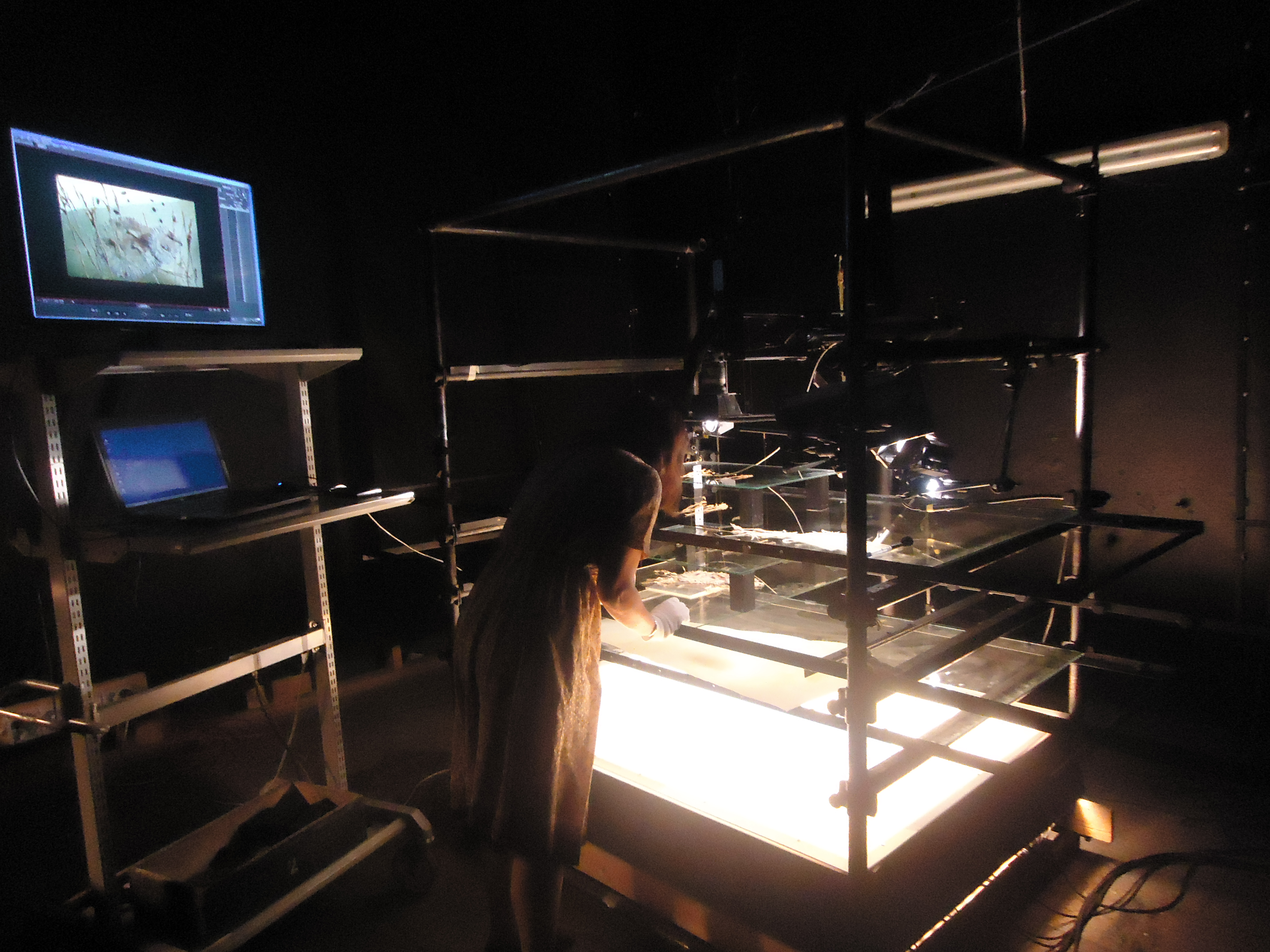 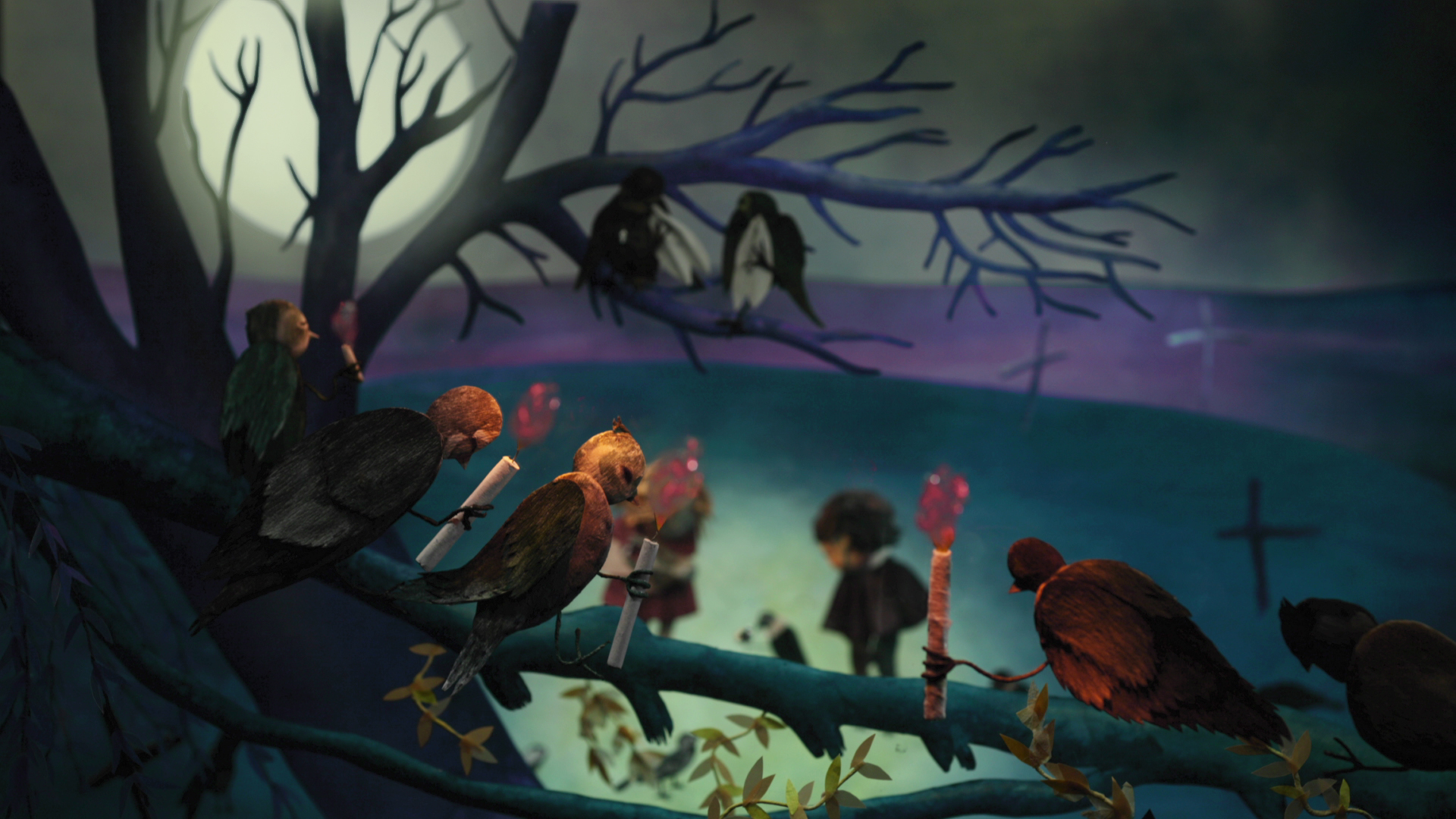 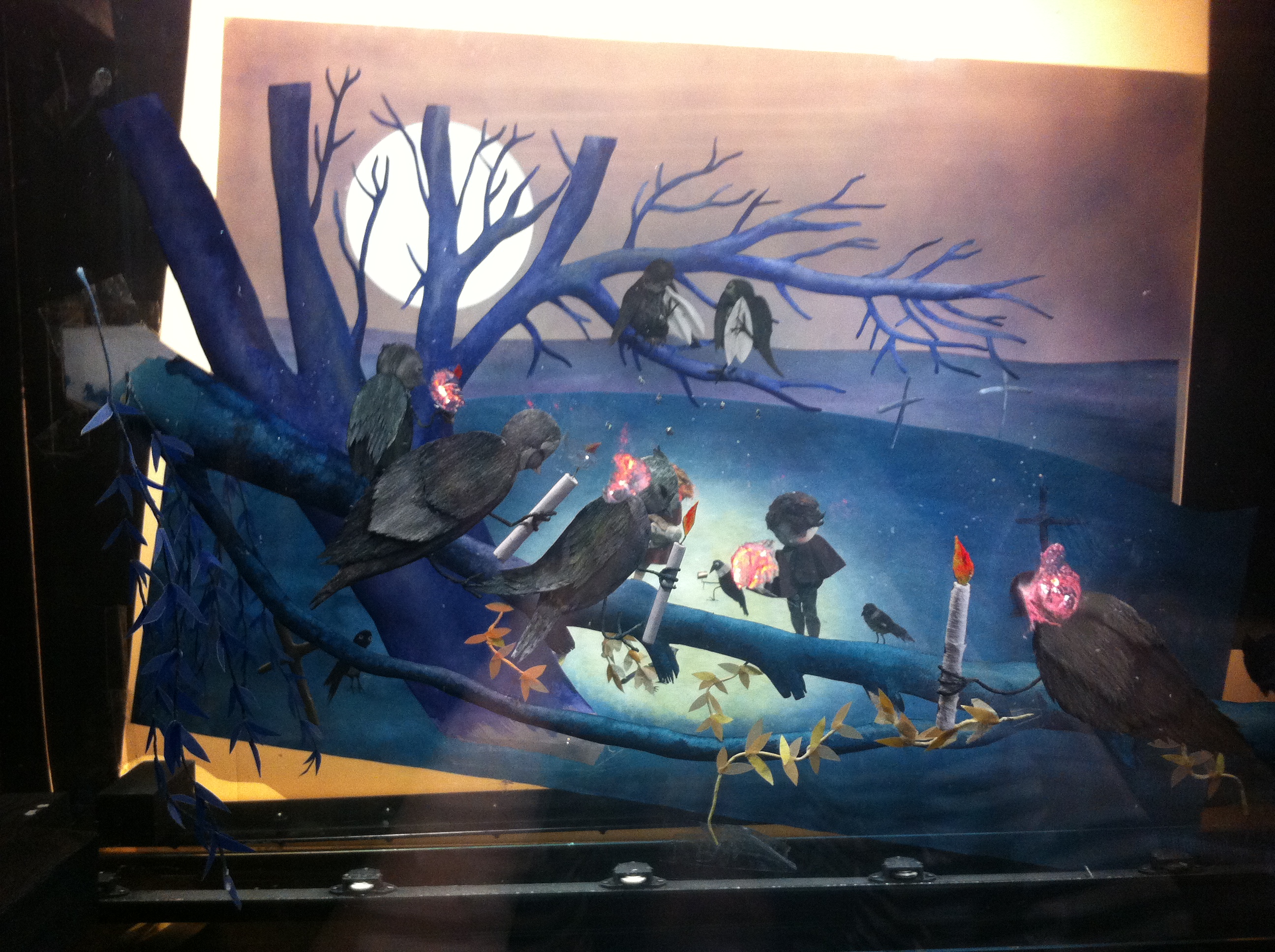 /> Set building[/caption]The film is shot on a multiglas animation table.The table has 5 -12 glass plates set at different heights.The figures are then placed horizontally on the glass. A camera is suspended over the table, aimed down at work. It’s like a horizontal paper theatre – a kind of “staging” of paper figures. A camera is suspended over the table, aimed down at work. Then the lights are adjusted (believe me- not easy with so many reflective glass planes to work with…) and photograph the image.
To build environments on a multi-level glass table, one has to know how to create the illusion of depth horizontally. When the camera hangs over the work at different
distances to the glass plates, the layers get varying depths of field. There are several other ways to create the illusion of depth in an image. Techniques commonly used in theatre can be applied here, for example manipulating the composition using colour and light and distorted perspective.
To make sets this way requires a lot of planning, measuring of distance between glassplates, sizes of props in relation to each other and so on. It´s takes a lot of experimentation to see what works. And even more if there are panning shots- as all the glassplates has to move in relation to each other, millimeters at the time. And the glassplates at the top has to move faster than the ones at the bottom and so on! It can be a real headache to plan these shots!

Image depth is particularly relevant for this film. Capturing the contrast between mountains, sea, moon and sky with insects and small details in nature, is an important part of the visual expression. Microcosmos is closely connected to the Macrocosmos. Another reason I choose to use the multi-level glass table is because I believe it works best with multi-layered stories. By that I mean stories that have several agendas, metaphorically and symbolically, such as fairytales. The story has to resonate deeply with several “layers” of meaning. 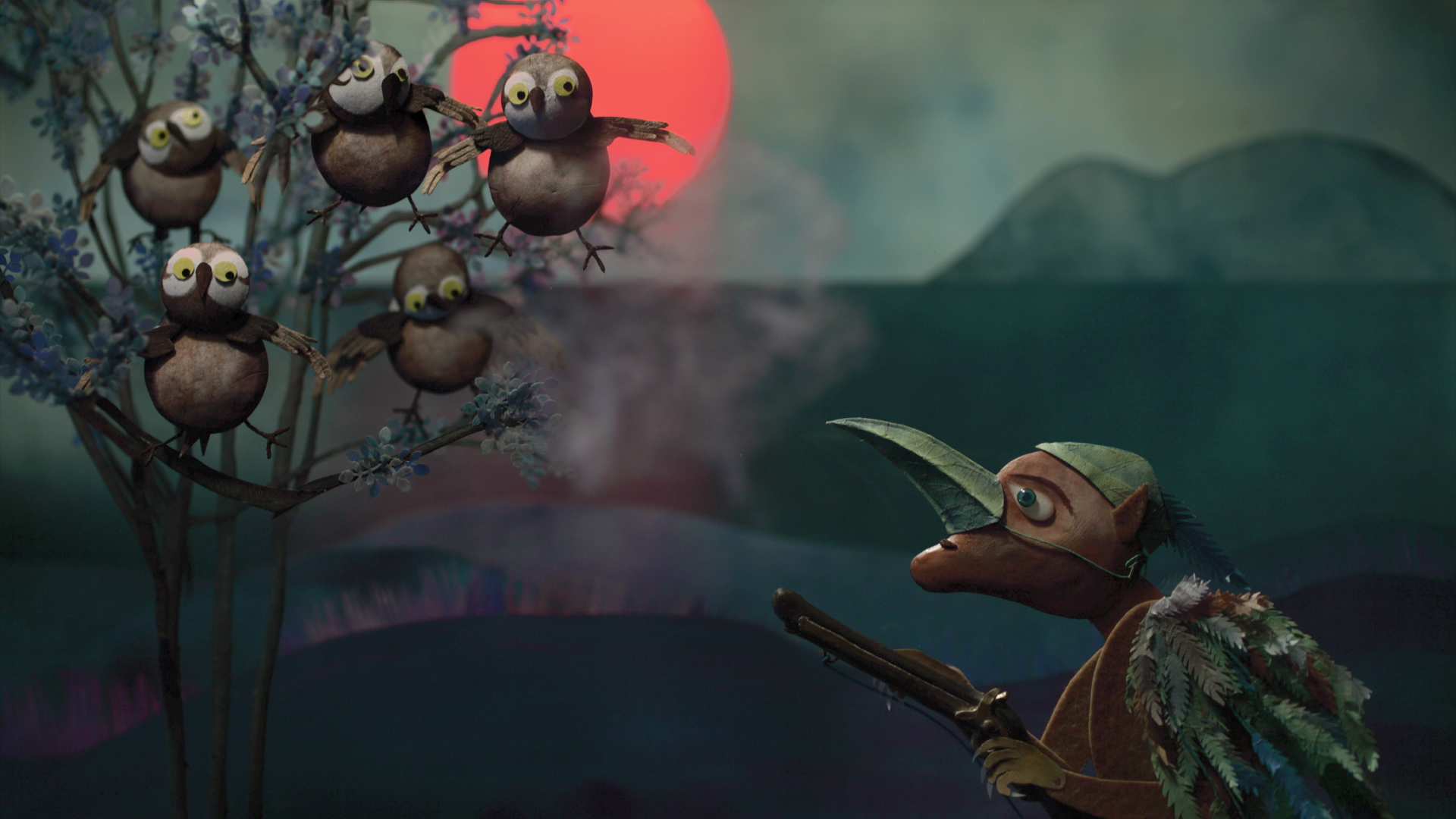 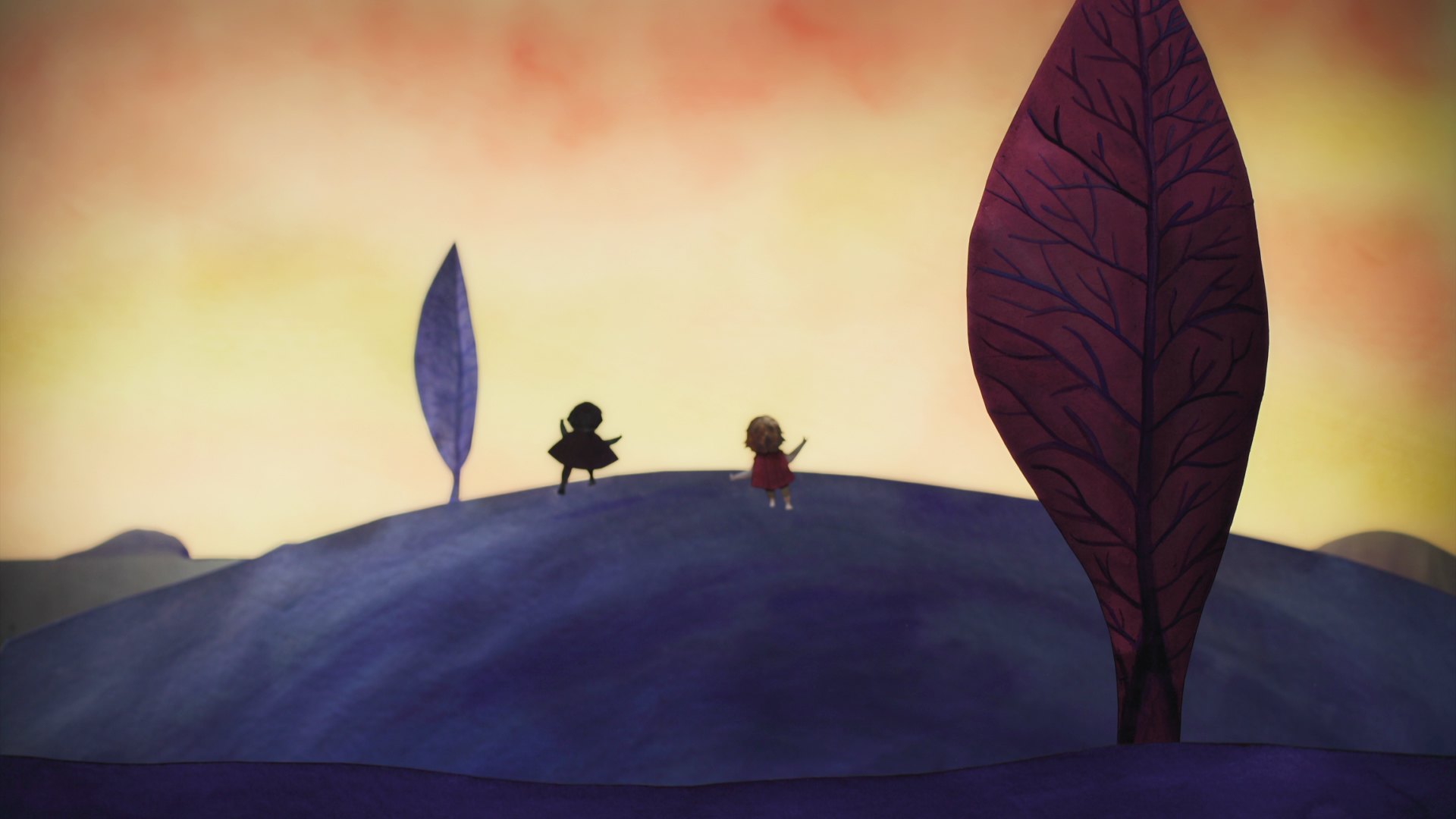 Multiplane animation tables was most commonly to used between 1920 – 50s. Disney used one when he made Snow White. Yuri Norstein is one of the most respected multiglasplane directors in the world. And now Anita Killi – from Norway. And also if you remember The Moomins TV- series from the 70/80s they were made on one of those too. I suppose making 2D animation on the computer makes more sense nowadays. But the multiplane gives unique possibilities to work with elements that has relief and texture, and to play with real shadows and light. 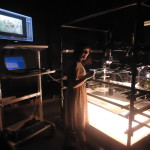 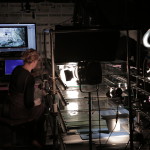 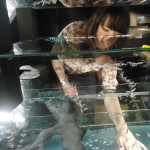 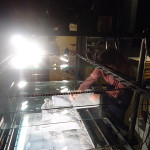 Elin doing tests to get sizes and perspectives 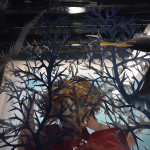 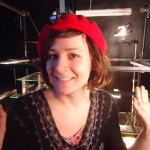 Margrethe Danielsen - always great help and the sunshine of Nukufilm! 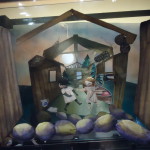 There are a lot of little tricks one can do to create shadows, fire, smoke and so on.
Obviously shadows are a challenge when most of the props are completely flat.
In one of the shots there are moving shadows in the ceiling of rabbits, birds and fish
(the animals the children find and bury). The shapes were scanned, made to move in after effects,
the projected on the roof. To create the animation, Urmas used this great circular machine that
controls the movement of the shadows with the shots taken.
A lot of the shots in the film are quite dreamy, with high contrast shadows. To make shadows on we had to place tiny pieces of cell paper (with the particular shape drawn on it) under the prop, fix to the glass and Urmas lights the pieces so they cast shadow.
The shot still need some post-production work to remove the visible cell paper under the trees.
Smoke was created, using a out of focus see through cloth on one of the surfaces.
Fire was made either with paint, light and also using moving projections of flames.
I also used quite a lot of paint directly on the glass, to create various effects. 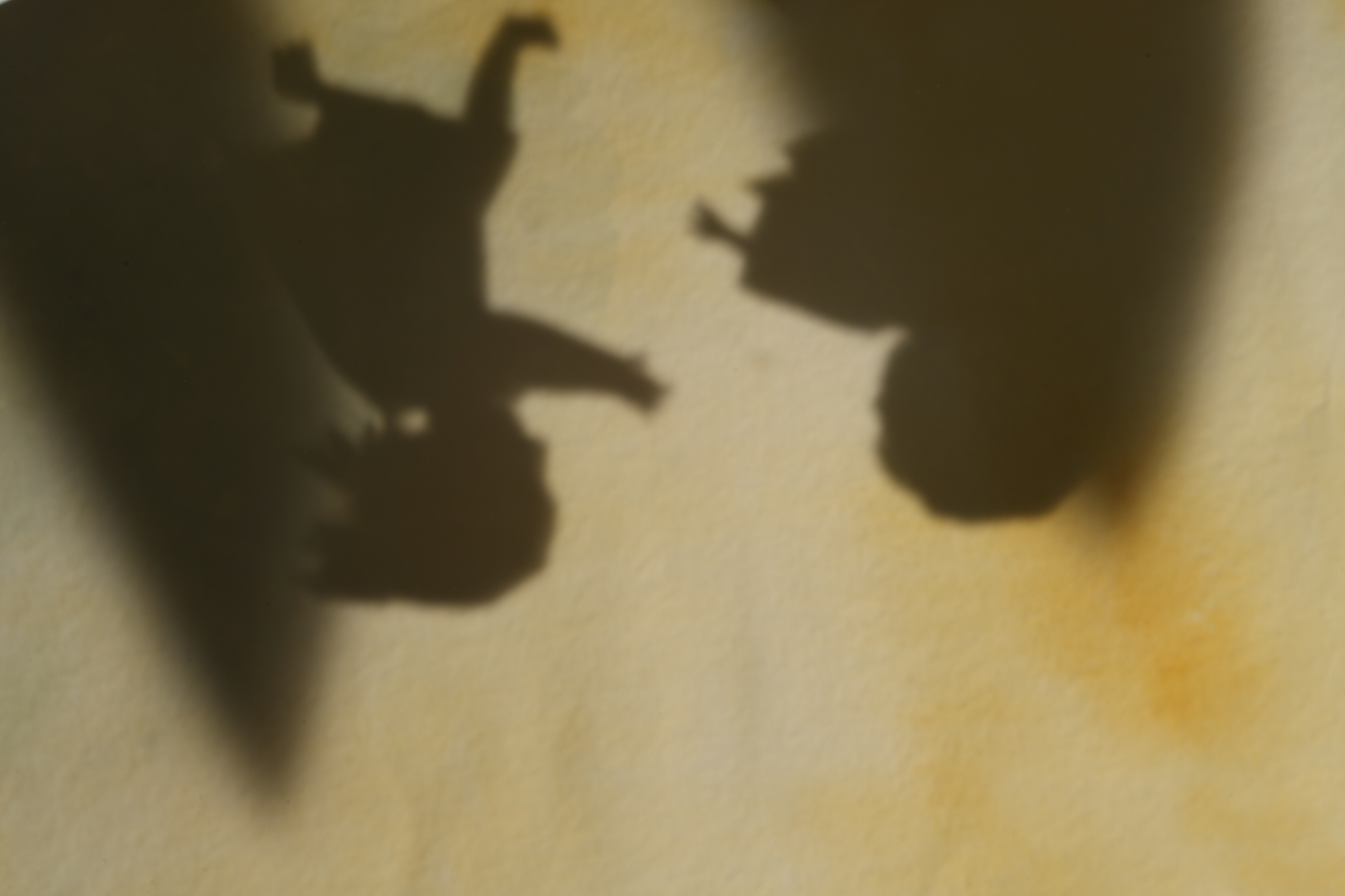 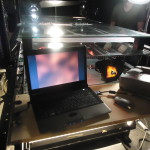 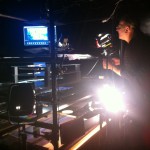 Urmas is a wizard with lights and stop-motion effects 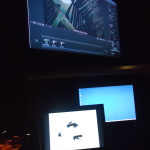 Moving shadows in the ceiling ... 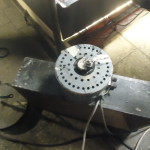 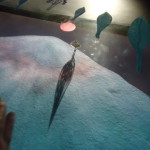 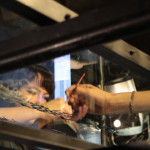 Painting directly on the glass 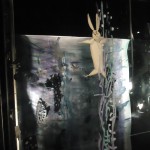 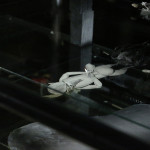 Making smoke by placing a thin, out of focus cloth on upper layer. 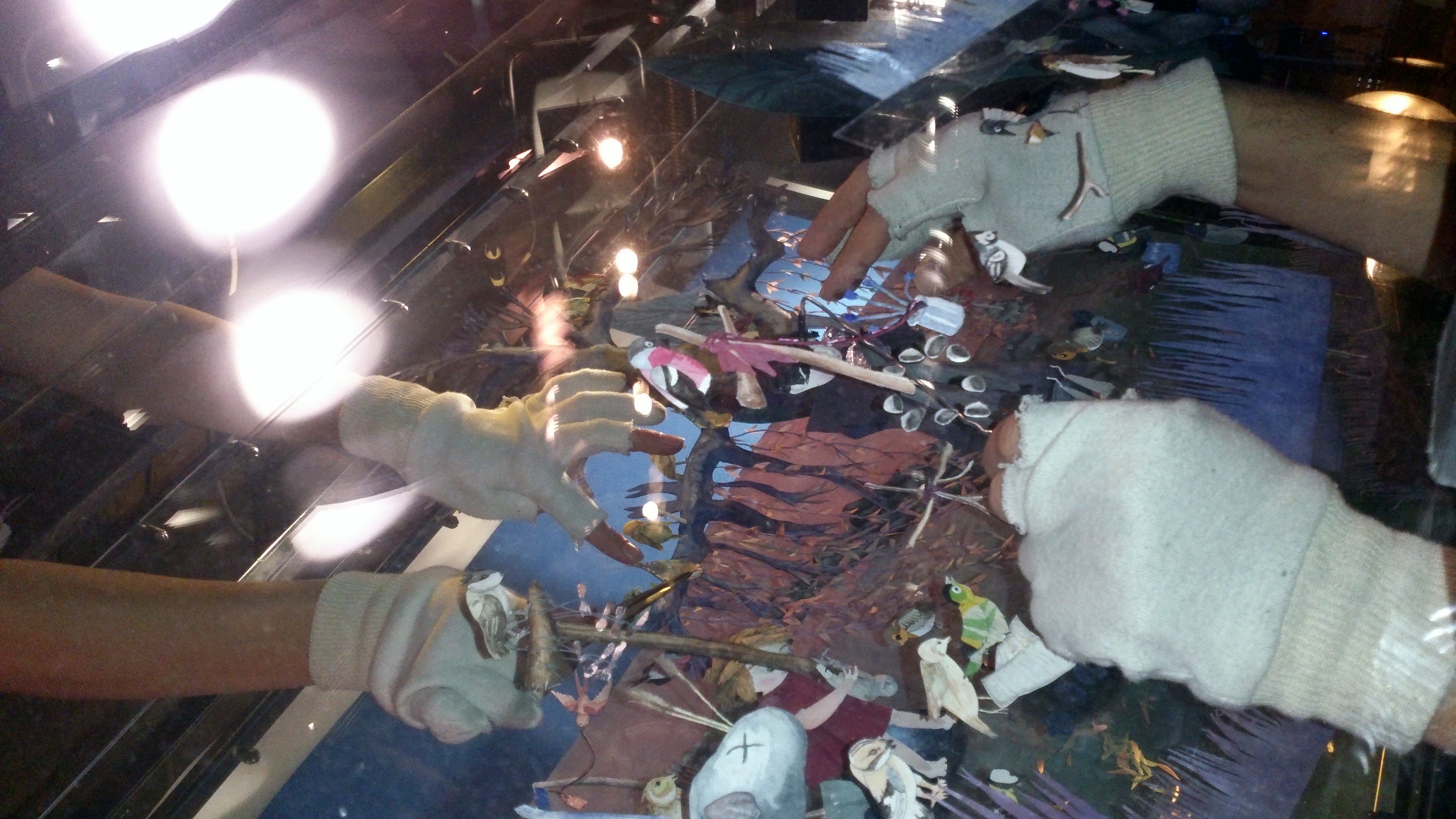 With all the artwork and puppets placed correctly on the glass and the lights set up, we finally fasten everything to make sure that nothing moves during the shoot.
Keeping the glass dust and dirt-free is a big challenge in multi-plane animation!
The key animator for this film was the experienced and incredible talented Triin Sarapik-Kivi.
I feel very lucky that she made the world of the film come alive with her magical touch. Also Andres Tenusaar and Olga Bulgakova animated some shots. They all did a fantastic job.
The animation is done by using replacement animation together with traditional cut-out animation. Replacement animation means that we can achieve different facial expressions by replacing body parts, head, eyes, mouth, etc. We also use traditional cut-out animation where body parts are fastened and animated by moving them instead of replacing them. 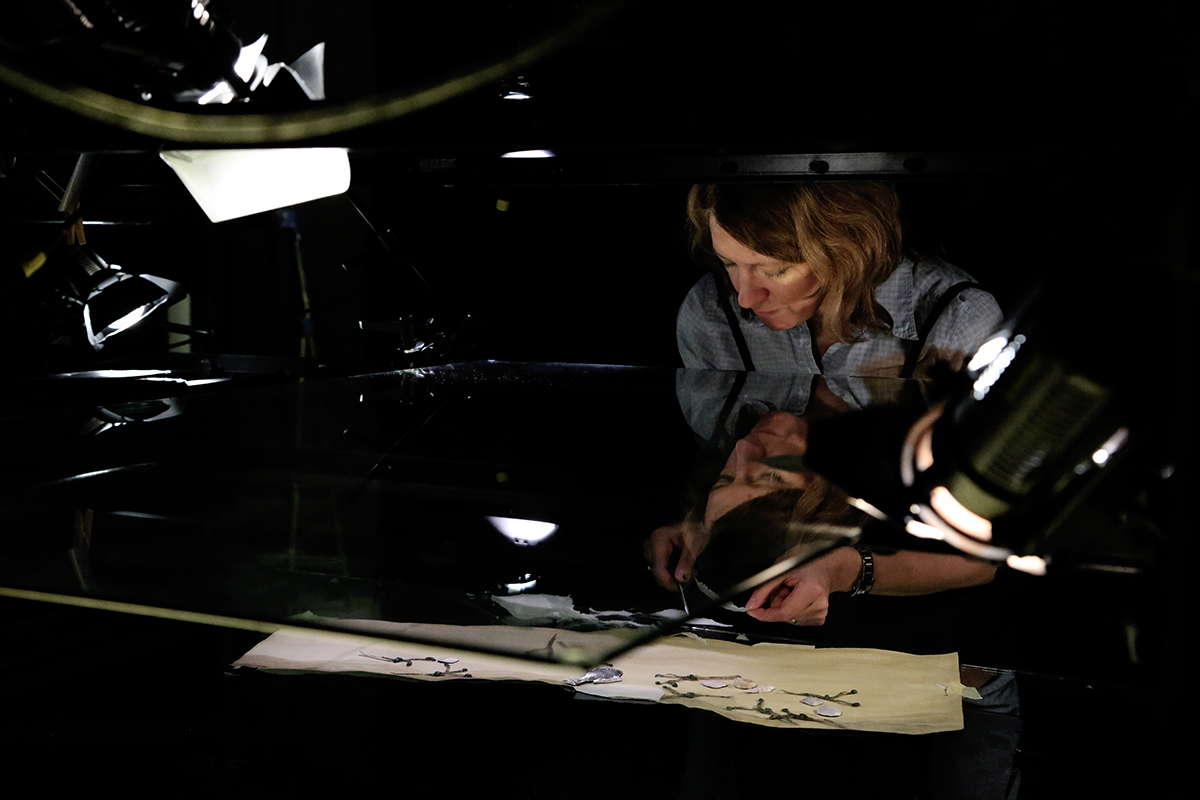 It´s obviously very time consuming to animate this type of technique. Also with so many details it´s incredible fidgety. Triin is one the most patient people I have ever met!
The film had a large number of shots (over 140 shots) and different sets.
Also all the manual panning and zoom done on the table, meant a shot might take all day. As many of those shots, you can not stop shooting as the light will change too much. So you have to keep going, until the shot is done. 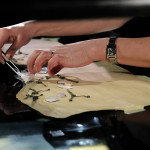 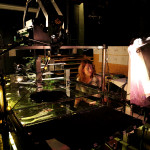 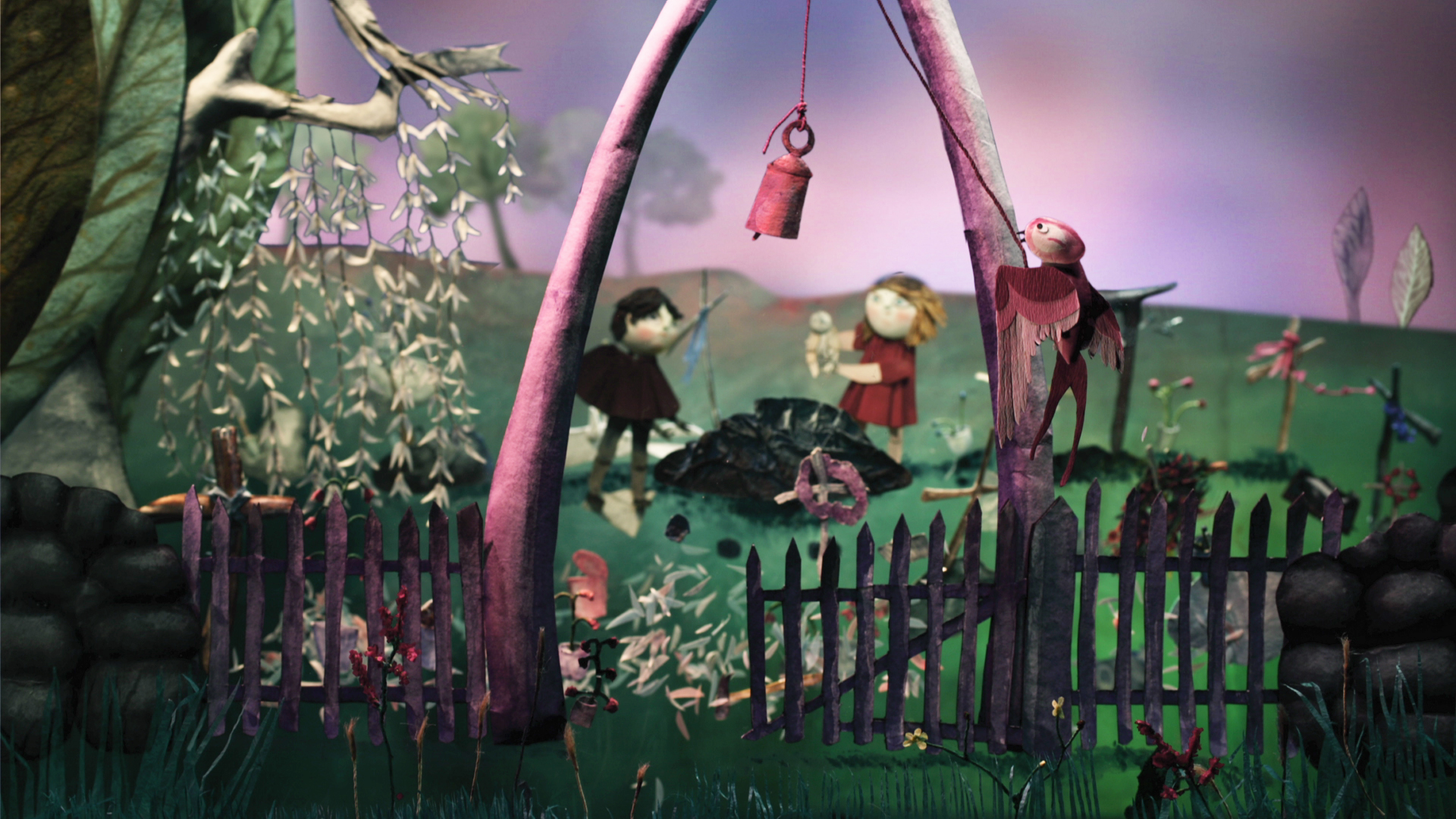